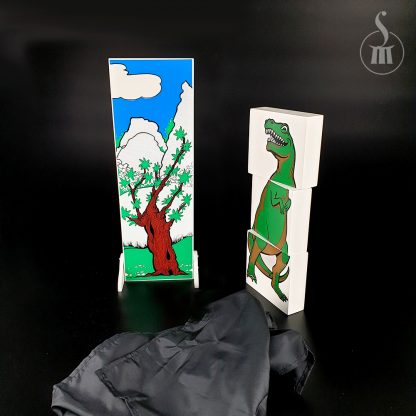 A different version of "Skeleton in the Cupboard" and perfect for your kids' shows.

From a great range of “block stack” tricks, here’s the long  thought extinct Dizzy Dinosaur! Based on the famous “Skeleton in the Cupboard”.

Requires a small amount of assembly (wooden feet need attaching to the tube).

From the Supreme paperwork (included):

This modern version of ‘Skeleton in the Cupboard’ not only comes over as the very latest and freshest version yet, but uses a theme which the children are just waiting for.

The performer displays a picture of mountains, boulders and a scene of the environment of the time when dinosaurs lived upon the earth. This forms part of a wooden flat tube, and when this is lifted, three large wooden blocks depict the image of a DINOSAUR, standing upright on its back legs. The magician explains that there is the head (top block), the tummy (middle block) and the feet (bottom block).

This particular dinosaur is called Dizzy, because of his silly antics. The feet are first dropped into the tube, then the tummy and finally the head. “Watch”, says the magician… When the tube is lifted his head is at the bottom, his feet above and his tummy at the top – a real mixed-up dinosaur!!!

The effect is repeated, the blocks being placed inside the tube in the correct sequence, always resulting in Dizzy being disarranged. Finally, Dizzy, the head-case of all dinosaurs, loses his head! The head block is shown and placed under a cloth. The feet and tummy blocks are arranged and placed under the tube. The head block completely vanishes – into thin air… reappearing back on top again. The tube is lifted to reveal the missing head back in position.

They said it…"A MILLION THANKS. WONDERFUL!" 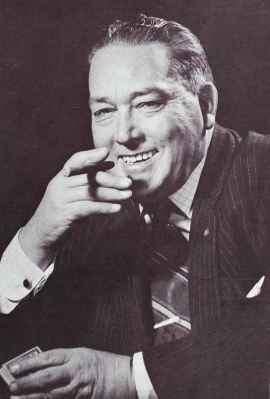 Sign up for early bird notification of the latest trick releases…